Parrish St. Main and Corcoran - was errected in its place. Margins are likely to remain tight, and competition remains keen. This improvement resulted from our concerted efforts to tighten lending practices and to strengthen our collection efforts. In , the company had grown to such an extent that the existing building on Parrish St. It was one of only two banks to continue operations in Raleigh in the wake of the stock market crash. 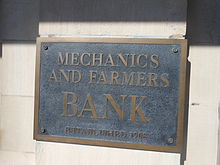